At SALAMAS LAW FIRM, we do things differently; we have a strict policy that we follow for every client regardless of their circumstances. We never advise any potential visa applicant to apply for migration in either a temporary or permanent visa capacity unless they can meet all of the visa criteria set out by the Department of Immigration and Border Protection (DIBP).

We will always be honest and open about your visa options and advise you of the best way of migrating to Australia by way of providing a professionally written and detailed report regarding your eligibility.
For more information regarding our services, please visit our website for professional guidance, advanced and visa specific information on;
Business Migration
Skilled Migration
Employer Sponsored Migration
Student Visas
Family, Parent and Partner Migration
Ask Yourself:-
If an agent is cheaper than those averages – Is he cutting corners and risking a refusal?
If an agent is dearer than those averages – Is he out of touch?
Please Note THAT OUR Migration Agents in Australia must be registered, However this is not the case overseas whereby some cheap and nasty agents purport that they are registered.
So - If an agent is not registered with MARA – Is he unprofessional and lacking knowledge?
To process your matter which will specifically determine each applicant’s eligibility to apply for a visa, please order an evaluation report. This evaluation report will also FULLY DISCLOSE all associated migration costs pertaining to your matter.
For more explanation, we are ready to help and submit for you the application above.
Contact info: 00961 3 424172

On 18 April 2017, the Turnbull Government announced the abolition and replacement of the 457 visa program. A number of new visa eligibility criteria were introduced immediately, and formal abolition will follow on 1 March 2018, when the 457 visa is set to be replaced by the Temporary Skilled Shortage (TSS) visa.

Recently released Department of Immigration and Border Protection (DIBP) visa data provide evidence that employers and migrants may have responded in a significant manner to the policy changes: the number of primary visas granted for sponsored workers from July to September 2017 fell by 35.7 per cent compared to the same period in 2016. 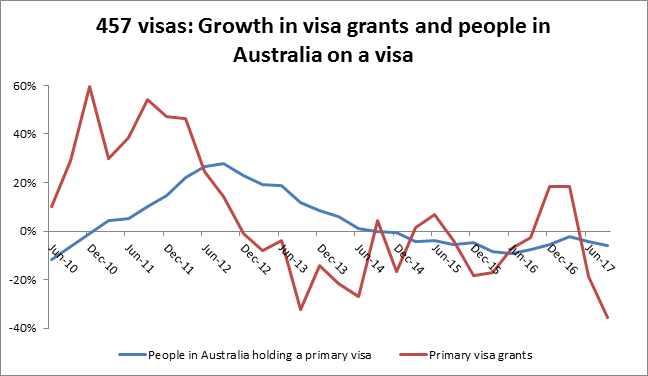 As economic conditions did not sharply deteriorate in the July to September 2017 quarter, it seems unlikely employers stopped using the 457 visa program due to a big reduction in demand for workers. This suggests the change in government policy was an important factor in shaping the visa grant trend. However, there has been little public commentary or analysis of these changes or recent data (an August 2017 report by Bob Birrell from the Australian Population Research Institute is the major exception).

The major change from 18 April 2017 was a one-third reduction in the number of occupations available to employers wanting to sponsor a 457 visa worker, and the splitting of the remaining occupations into two distinct lists, with different eligibility criteria.

The Prime Minister called this ‘a very substantial reduction in the list of skills that qualify for these visas.’ As an example, in a widely-reported change, ‘Goat Farmer’ was removed as an occupation. The Opposition Leader described the changes as a ‘con job, not a crackdown’ because no visas had been granted to people under the category of Goat Farmer over the previous decade.

One example is Cooks. Since 2005–06, Cooks have been the third most common occupation in the 457 visa program, averaging about 1,500 visa grants per year. As the table above shows, while Cook remains an eligible occupation after the changes took effect, there was a strong reduction in that category (around 30 per cent) in the July to September 2017 quarter. This raises the possibility that policy change other than simple occupational eligibility may have had an immediate and substantive effect.

Further evidence is provided by looking at Chefs. In contrast to most other occupations, visa grants for Chefs grew slightly in comparison to the previous 12 months. Unlike Cooks, Chefs are on the occupation list available for a four-year, renewable visa with a pathway to permanent residency. Cooks are now restricted to a two-year, once-renewable visa with no pathway to permanent residency. The relevant lists are the Medium and Long-term Strategic Skills List and the Short-term Skilled Occupation List, established by legislative instrument.

The increase in Chefs could reflect genuine growth in employer demand for Chefs. However, it may also reflect employers who previously nominated Cooks now nominating Chefs as this is a more advantageous occupation for migrants and employers given visa conditions. If the job being performed in the business has not changed, this might be called ‘occupational inflation’, as employers upgrade their occupations to take advantage of more beneficial immigration policy settings.

Looking to the future

Additional eligibility changes may further reduce the demand for these visas. From 1 March 2018, applicants will require at least two years’ work experience and a new training levy will be introduced. Bob Birrell’s report highlighted the new work experience requirement as having the potential to further reduce the number of future visas. He also notes changes to the two permanent employer-sponsored visa categories (the Employer Nomination Scheme and the Regional Sponsored Migration Scheme) mean that these categories are also likely to see lower numbers in the future.

Unfortunately, there is no additional information about the 457 visa that is publicly available. For example, the data does not show how many visas are rejected or whether a migrant moves jobs in the labour market, from one employer to another. Salary data is also not included in the most recent data. Additional salary information would help to better inform analysis of policy change as salary is an alternative proxy for skill level and also helps to understand the demand for labour from employers.

This analysis also comes with a couple of caveats. Isolating the effects of a specific policy change is difficult as many factors determine visa trends. In addition, some visas granted between July and September 2017 would have been applied for prior to 18 April 2017. Lastly, it is possible DIBP has changed their approach to processing visas, resulting in a larger backlog of pending applications. Unfortunately this information is not available for public analysis.